The Methodist circuit riders of the past century pioneered with the first settlers of Choctaw County and out of their needs and plans came the camp meeting movement over seventy-five years ago. Pioneering is usually fruitful as it is difficult, and from the camp meeting that began seventy years ago at old South Union Campground has wrought an institution that meets the recreational and religious needs of today. 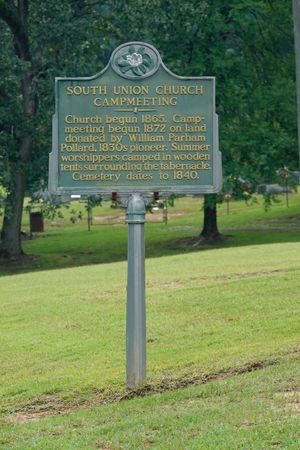 Following the war in 1866 the older churches were organized and were served by regular pastors. One of these churches was South Union; nestling in the dense pine forest near one of the finest springs ever discovered. The original church at South Union was built of huge logs near the ever-flowing spring. It was built with an apartment back of the pulpit for accommodation of the Negro slaves, where the slaves or former slaves, worshiped as devout and regular as their masters. In this crude structure the congregation worshiped for a few years following the Civil War. The preaching day was on Thursday only once each month. On that day all work was laid aside -- for all, including the slaves went to church. The preachers, who were known as circuit riders, went by horseback and usually spent several days in each community before and after "preaching day."

There were few vehicles of any kind at that time, and often only one horse to ride. The woman rode that, carrying one or two small children, while the man and the other children walked to church.

The original log structure at South Union eventually replaced by a better and more commodious church, better suited to the needs of the people. In the original church and the one immediately succeeding it, the gospel was dispensed by such heroes of the Methodist ministry as Reverend Harrison, Tom Castles Hyde, Murff, William and J.O. Woodward (uncle and grandfather of the writer) Archie Moss, Jimmie Carlisle, Kenneth Jones, W.R. Rainey, Hinds, Muncie, and others.

Thus in this spiritual, intellectual and moral atmosphere where plain living and high thinking were the order of the day was conceived the idea of a camp meeting in 1872 and the camp ground was laid off in a square. The land was given to South Union for this purpose by Mr. Parham Pollard, or Grandpa Pollard as he is familiarly and lovingly called to this good day -- and we would pause to state that he lived to be 101 years old. He has many descendants living in Choctaw County who have followed in his footsteps for service and sacrifice. Click here for a copy of the original warranty deed.

The encampment was in the shape of a square. The large shingle-covered tabernacle was built by Mr. Arthur Tenhet. It is said that when the timbers and building material had been assembled for the structure that the grand old men of the community gather for a prayer which prayer was led by Mr. Wesley Townsend. This prayer one of the most eloquent and appealing in its simplicity and faith sought God's guidance in the building of the camp ground and for the continuation for good. Gathered around Mr. Townsend knelt Mr. Parham Pollard, Archie Moss, Arthur Tenhet, Humphrey Buck, John Buck, William Adams and others.

The first tents that were erected around this tabernacle for the encampment of the worshipers were somewhat crude in style and structure. In the absence of nearby saw mills the farmer, with axe, saw and fro felled the giant virgin pine trees, cut them in sections of uniform length and split them into slabs or boards, out of which the walls and roof were made. Split logs with pegs driven in, formed the crude benches that first seated the tabernacle. Oat straw was a substitute for floors. After the farmer had his oats thrashed he would haul the oat straw to South Union to cover the floor of the tent or tabernacle.

Scaffolds, covered with straw over which quilts were spread, served as beds. A long brush arbor at the rear of the tent sheltered the dining room from the sun, while another one was used for the benefit of the cooks and water carriers -- all of these Negroes.

The entire campground was lighted at night by huge pine torches placed upon earth-covered scaffolds. The tabernacle was lighted at night by the use of tallow candles made and donated by the generous women of the church. These required the care of at least two persons during the services in order to have anything like satisfactory lights. Each woman who camped was busy before the day set for the camp meeting to begin moulding candles from tallow which she had made from the fat of beef.

The hours for worship services were: Sunrise prayer meeting, preaching services at eight and eleven o'clock in the morning and three o'clock and eight o'clock P.M.

Prayer meetings were held at five P.M. in the beautiful oak grove surrounding the camp ground. Many people scattered over these United States testify to the fact that they received their first spiritual thrill at these grove prayer meetings.

The campers were called to assemble at these services by the long, loud blast of a "Texas" horn owned and used in John Buck home as a dinner horn. One of the Moss boys, usually Wesley, performed the service of blowing the horn for each service. Wesley Moss, was considered adept at blowing that old horn that could be heard for miles around. The campers were still called to later assemble by the blast of the horn, usually blown by Gene Bruce, Jep Bruce or Jim McKinnon, and others where descendants of the pioneer settlers. 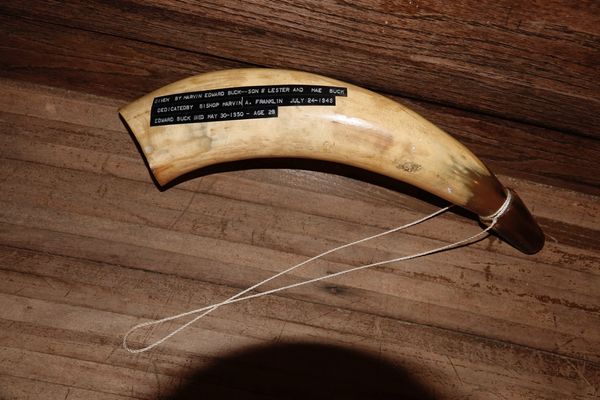 There were no musical instruments in those days and some of the campers must "raise a tune." Mr. Wash Gordon was the song leader -- in the absence of some Methodist preacher who was gifted in song. Wash Gordon had a voice that was both musical and powerful and his leadership added much to the song service.

These camp meetings were first held the third Sunday in August but in 1892 they were changed to the fourth Sunday in July, at which time they continue to be held, beginning on Friday before the fourth Sunday and closing the following Wednesday night.

Camp meeting without a "mourner's bench" was an unheard of thing, and a series of services conducted without the use of such an arrangement was thought to be an innovation, and was regarded as a failure if not a travesty on religion. This bench was placed in front of the pulpit. Sinners were invited, begged and persuaded to come and kneel before this "throne of grace", the good men and women of the congregation came and knelt around the penitents and there wrestled in prayer for salvation of his soul. At these altar places, many hundreds professed to have been born again and gave expression to his joy in shouts of praises. Methodist are still called shouting Methodist. While some of these may have fallen away or were possibly deluded yet many others were able thereafter to give reason for the hope that was in them and those who have been called to their reward have died in the triumphs of this living faith.

The cooking in the early days of South Union camp grounds was done on log fires in pots and skillets. Usually Negro men and women did the cooking. A place was provided for them to sit under the tabernacle and worship after their work was done. Negro boys carried buckets of water up the hills to the tents.

The people wore home spun clothes to South Union in its early days. That was right after the Civil War. The defeat of the South by the North in the terrible struggle for Southern independence was a challenge to the manhood and womanhood of Choctaw County to let courage match the calamity. To stand erect when all was leveled by the storm took courage and the pioneers of old South Union had courage. They wove the cloth and made their garments.

Old men today who were boys seventy years ago recall with a thrill the first carriage that was driven to South Union. It was owned by Colonel Drane of French Camp and driven by a faithful Negro man. Mr. Joe Moss stated that no boy of today gets any more thrill out of seeing an airplane come over than he did when that first carriage came driving up to South Union.

The encampment has had an eventful history. On Sunday morning, April 22, 1883, a cyclone swept through the forest, devastating everything in its wake. The camp ground happened to be in its course. Every tent, the tabernacle, shade trees and even the monuments marking the graves in the nearby cemetery, were demolished.

On July 22, 1914, disastrous fire destroyed the encampment. But none of these things daunted the spirit of the friends and patrons of the camp meeting. Immediately following these catastrophes they rebuilt the tents and tabernacle and held the annual camp meeting without missing one.

Thus through an unbroken term of seventy years camp meetings have been held annually. Today the grandchildren and great-grandchildren of those heroes of the long ago are the chief camp ions of the camp meetings and right well do they acquit themselves in the manner of perpetuating this sacred interest. It is a trust thrown to them from falling hands, they have taken up the responsibility with a spirit that equals that of their pioneer forefathers who built the encampment. Not only has the fame of those old pioneers been sung down through the ages, but in the General Assembly of the saints many will rise and call them blessed.

Methodist preachers who have been identified with the establishment and growth of South Union include the best talent of the Southern Methodist church. Three men whose names are most outstanding in the list are the Reverend W.R. Rainey, Jimmie Carlisle and the Rev. Casey. Brother Rainey would move down from Sturgis and Mrs. Bill Smith stated that he was so closely identified with the camp meeting that as a child she felt that the meeting only began when she saw him come riding in on his gray horse. 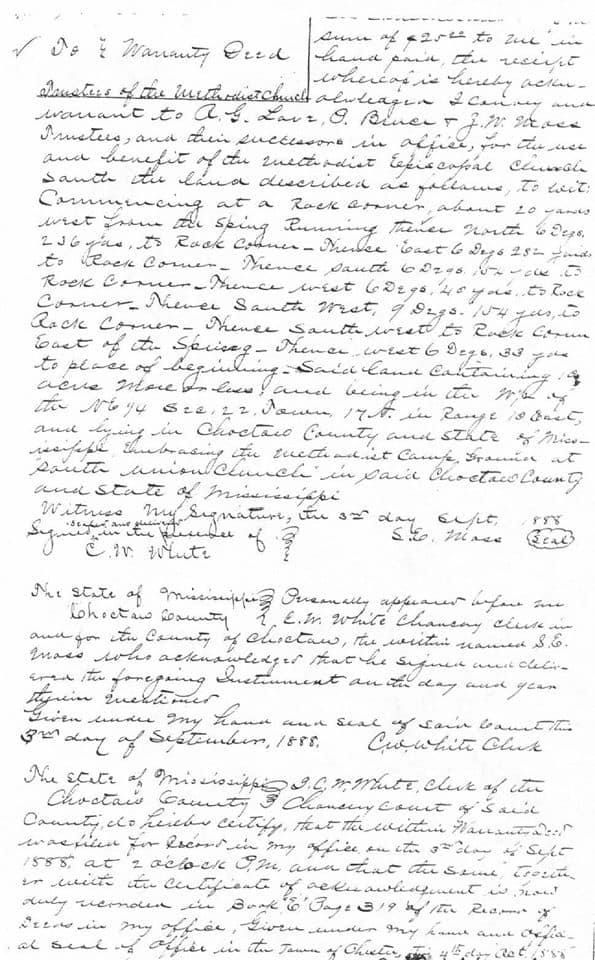